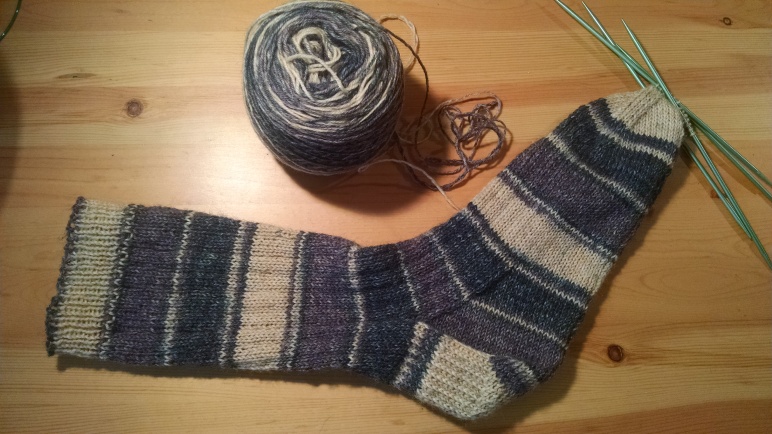 A week ago I was almost convinced I that I’d be Kitchenering up the second of two socks and be tip toeing through the our tiny place in a brand new pair of socks. Yes, new socks require tip toes and a great deal of care on hard wood floors but also, I just learned I can tip toe. It’s such a simple little thing but I was thrilled!

That however wasn’t to be but I did learn a few things about myself as a knitter and being a bit nicer to that chick I see in the mirror.

So where was I?

Ah yes, last week I  was  knitting socks at break neck speed (for me) and feeling pretty confident that instead of taking a month to complete a pair of socks, I’d do it in two weeks. And I might have made it except that Friday I opened my front door to a familiar looking box and I got distracted by new gear. I’d still be done with my socks… right… after.. I…figure…tiny fixed circular needles out…

Nope. By the time I got back to socks yesterday, I had no idea where I was or when I got there.

Friends came over Saturday afternoon right as I was getting to the toe of my first sock, and I don’t know if it was the wine, or over confidence, or both that made me think I could keep track of decreases on alternating rows. Three dropped stitches, five tinked back rows and a new bottle of wine later I made myself put it down and leave it down until I realized it was late Wednesday afternoon. Yes, I’d been distracted with knitting Flax, but I was really nervous about picking up the sock – it looked uneven and I dreaded having to rip it back further.

Cue the supreme awesomeness of self striping yarn. I remembered that I started to knit the toe after finishing the last large green section and was able to use the stripes to find my way back through the pattern! It took a while but I got back on track.

The problem was that this was late Wednesday and I’d started to panic that I had very little to show Sock Thursday and worse it paralleled my ability to tip toe. I hadn’t kept up with my sock and that weirdly threw off the way I was taking care of my foot and leg. It was not a good feeling.

Rather than get tangled in that though, I decided I needed a reset.

I know I work best as a monogamous knitter but that I can work monogamishly if I have firm boundaries and realistic expectations. So I work on socks as I ice up after PT and that has to happen before I get time with the one other project.

Thus far it’s been a success!

As I type, I am still working on the first sock, making sure the toes are comfy and using the color changes in the yarn to take good notes as to how I’m deviating off the pattern there. Right now it looks like I’ll be Kitchenering in a contrasting color and I’m really excited!

Socks are awesome, you should cast on a pair, post and link up the Sock Thursdays crew so we can oooh and ahh over your sock adventure.

16 thoughts on “Sock Thursday: Or How Self Striping Yarn Saves The Day”